The Line Is Holding … And Advancing

Home/In the News/The Line Is Holding … And Advancing

The Line Is Holding … And Advancing

2017: IN SC THE LINE IS HOLDING…AND ADVANCING

IN 2017 DIXIE WENT ON THE OFFENSIVE IN SC

From the Low Country, to the Midlands, to the Up Country, South Carolinian Confederate Heritage supporters were delivering blows to flag opponents, politicians, and local governments across the State all year. Confederate Battle Flags were restored, legal battles were won, new monuments were announced, and flags cluttered skylines all over the Palmetto State in 2017, and plans are in the works to advance even further in 2018. Campaigns spearheaded by The South Carolina Secessionist Party have delivered political black eyes and public embarrassment to South Carolina’s anti-flag politicians, business owners, and activists all year and we thought you might like to recap the South Carolina wins of 2017. 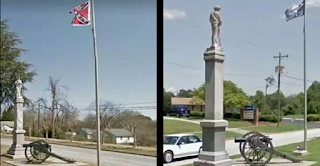 (Walhalla Monument After and Before)

The owner of the Edisto River Creamery had a very bad year following his announcement that he would be removing the Confederate Battle Flag that sits next to his property and is owned by the local SCV Camp. Camp leader Buzz Braxton stood between the creamery owner and the flag pole and refused to allow the flag to be removed. After the incident the Creamery owner was beaten in multiple legal battles over the flag, with the ultimate ruling being made that he could not touch the flag because the property was not his as he had claimed. The lawyer of the creamery owner, Justin Bamberg, is a member of the South Carolina House of Representatives and is one of the politicians who voted to remove the flag from the South Carolina State House in 2015. He is the lawyer who is now losing battle after battle over the flag.

In response to the College of Charleston hosting Bree Newsome (the woman who climbed the pole and removed the Confederate Battle Flag at the South Carolina State House in 2015) to give a lecture called “Tearing Hate From The Sky”, the South Carolina Secessionist Party conducted The Grand Flagging of Charleston. During the flagging, six over sized Confederate Battle Flags were mounted on telescoping pole mounted in the beds of six pickup trucks. Those trucks parked on the top level of Charleston’s parking garages and lets the flags fly. The flagging took place during the South Eastern Wildlife Exposition, an event that draws roughly 40,000 people to Charleston. The flagging ruffled so many feathers that local media uncovered the schooled paid roughly $18,000.00 for Bree Newsome to speak, and the mayor issued an ordinance the next day to ban flags from being flown on parking garages. 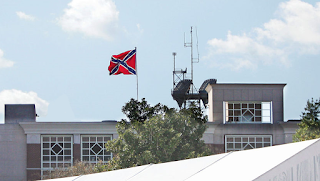 (One of the Flags In The Grand Flagging of Charleston)

When the Confederate Battle Flag was removed from the State House in 2015 the NCAA announced that they were lifting their boycott of South Carolina. When North Carolina passed its controversial “bathroom bill”, the NCAA tried to flex its political muscles and pulled the March Madness tournament from North Carolina and decided to hold it in Greenville, South Carolina, since the ban there was now lifted. But when the NCAA walked away from “transphobia” in North Carolina, the South Carolina Secessionist Party ensured they had a very confederate welcome when they arrived in the palmetto state.

Like they had in Charleston, Secessionist Party members mounted a large Confederate Battle Flag atop the parking garage right next to the Bon Secours Wellness Center where March Madness was being held. The flagging caught national attention, even prompting a heated discussion on ESPN where a Southern anchor basically calls his co-host a biased yankee. See the video below:

In August of 2017 a first of its kind agreement was made in Charleston, South Carolina when the chairman of the South Carolina Secessionist Party and the leader of the South Carolina Black Nationalist Movement signed The Charleston Accord. The accord was an agreement to discourage violence or destruction of property (including monuments) in the aftermath of the Charlottesville debacle, and to work together to encourage dialog about the controversial topics of Confederate symbols, racism, and politics. Since the signing of the accord, the two leaders have spoken at multiple gatherings and events, held multiple joint press conferences to discuss issues that can be worked on together, and openly agreed that Confederate monuments should not be removed and new monuments should be erected.

The South Carolina Secessionist Party hosted the Second Annual Flag Raising on July 10th, putting the Confederate Battle Flag back at the South Carolina State House on the anniversary of its removal for the second time. Mrs. Arlene Barnum came back from Oklahoma to attend the event, give a speech, and launch a new campaign calling for better representation of black confederates during the war.

The South Carolina Division of the Sons of Confederate Veterans announced that it was advancing its long anticipated project of erecting the new “Signers Monument”. The monument would be in honor of those men who signed The South Carolina Ordinance of Secession in 1860.

NO MONUMENTS COMING DOWN IN CHARLESTON, SC

Much to our surprise, the democrat mayor of Charleston, South Carolina quickly squashed any talk of removing any monuments in the city. While some protests were held calling for the removal of monuments that to John C. Calhoun, mayor Tecklenburg said that he would not entertain notions of removing the city’s historic monuments, but would consider adding signs near by to give a broader story of the individuals the monuments are dedicated to. One such proposed monument was rejected by the Charleston Historical Committee because it was too emotionally charged.

Members of the Rough and Ready Sons of Confederate Veterans Camp and South Carolina Secessionist Party stood together spreading Confederate love to tourists leaving Myrtle Beach all Summer. On an overpass in Aynor, South Carolina, on Sundays throughout the summer, Confederate Flags were displayed for hundreds of thousands of people pouring out of the tourist hotbed on their way home. Videos of the flaggers have been spotted on social media posts from across the United States, further prompting discussion in communities where there otherwise might not be.

Summerville’s Louis Smith is a name that’s popped up several times in 2017, but the best mention of it had to come from local media when Louis Smith was escorted out of a Summerville City Council meeting by police. Louis Smith, members of the H.L. Hunley SCV Camp, and members of The South Carolina Secessionist Party attended a Summerville City Council meeting in which Louis Smith had announced he would be calling for the city council to issue a public reprimand against the SCV and South Carolina Secessionist Party.

Louis Smith brought a band of liberal misfits with him, who held up signs, yelled, shouted, called the mayor a racist, and eventually Louis and his posse were escorted out by police. Summerville City council issued no reprimands to the SCV or South Carolina Secessionist Party.

FOLLY BOAT BATTLE AND THE STING OF KARMA

When Secessionist Party members started painting the Confederate Battle Flag on the Folly Boat the residents of Folly Beach lost their collective minds. The Folly Boat is a boat that washed up onto the side of the road during Hurricane Hugo. Since then passersby and locals have turned the boat into a free access public billboard which gets painted sometimes multiple times in a single day. But when Southern Heritage supporters painted Confederate Memorials on the boat the liberal locals of Folly Beach had a full meltdown, some resulting in physical altercations at the boat. The liberals demanded that Confederate Flags not be painted on their boat. So Hurricane Irma swept the boat away later that year. Karma. Sweet Karma. 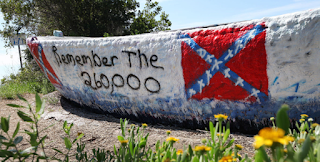 (A Confederate Memorial Painted On The Folly Boat)

TEACHER REMOVES FLOWERS FROM MONUMENT – THEN GET PUT ON LEAVE

Aaron Comstock was a music teacher at a North Charleston elementary school until he made a foolish decision that would prompt The South Carolina Secessionist Party to utilize liberal tactics against a liberal for the first time. Mr. Comstock took it upon himself to remove a bouquet of fresh flowers from the Charleston Confederate Defenders Monument….on Veterans Day. Fortunately, a member of the South Carolina Secessionist Party witnessed Mr. Comstocks actions, reported the incident to Party officials, and the Party made the incident public knowledge.

After more than a million views on social media, countless phone calls and emails to the school and school district administrations, Party officials were advised by officials at the school that Aaron Comstock was placed on administrative leave indefinitely. Charleston’s white liberal protestors became extremely rabid after word got out that Comstock had likely lost his job. Liberals clearly don’t like having their own tactics used against them.

One of Charelston’s most anticipated and highly attended events is the annual Cooper River Bridge Run. This year, South Carolina Secessionist Party members found a spot along the route and raised 30 poles with oversized Confederate Battle Flags for the 40,000+ runners to pass under on their route into downtown Charleston. Much to the flaggers surprise, the feedback and reactions from the runners was overwhelmingly positive from runners of every race and gender.

With projects already in the works across the State by multiple Southern Heritage Organizations, 2018 could be an even better year for us. The South Carolina Division of the Sons of Confederate Veterans will be electing a new Commander early in 2018. The anticipated outcome of each candidates election could not be more different. Should the wrong man when, we could quickly see victory turn to defeat in South Carolina.

The South Carolina Secessionist Party leadership is discussing new ways of moving forward in the new year, new campaigns to launch, and new tactics to utilize in the ongoing struggle to defend our Southern Heritage. We can’t do what we do without your support. As a non-profit we depend on the support of our members and supporters to get the job done and keep the enemy on the defensive. If you aren’t a member of a Southern Heritage organization like the SCV or South Carolina Secessionist Party we encourage you to join one. Join both if you qualify. Become active in the struggle to preserve our history for our children.

If you cant be active, support those who can. As a non-profit we depend entirely on donations. We don’t charge membership dues because we don’t believe you should pay a fee to be a member of an organization defending your own heritage. So without dues, we depend on the generosity of our members and supporters. If you want to help us make 2018 as good or better than 2017 in South Carolina, consider making a donation today.

We hope to see you at the next event. Keep a look out for events being planned in your area. If you want to see an event held in your area, contact us via Facebook or at our website www.scsparty.org. God bless you. God bless Dixie. Lets take the fight to the enemy again in 2018.