San Antonio, TX…ANOTHER victory in what we believe is a growing trend, the North East Independent School District voted 5-2 Monday to keep the name Robert E. Lee High School following months of controversy, and apparently some heavy handed tactics by those who were “offended” by the NAME Robert E Lee…

Some board members cried, saying they had been called racists.
“We have had some who have resorted to bullying, intimidation and threats in an attempt to gets us to change the name,” said board vice president Shannon Grona.

God bless those willing to stand for what is right!

Meanwhile, back in Old Virginny, members of City Council and the local NAACP have been pushing hard to have the Confederate battle flag BANNED from the Roanoke City Christmas parade, but City Council has determined that they cannot legally do so…

In discussions with the SCV about the parade, the NAACP asked the SCV to compromise, by marching in the parade WITHOUT flags.  Camp Commander Mark Craig refused to do so.

The parade is THIS Friday, December 11th, and we are calling on all who can attend to come out and support Commander Craig and the men who will be participating in the parade.  Bring as many people as possible and line the route and make sure the unit gets a rousing cheer, standing ovation, and great applause throughout the parade.  Let them know how much we appreciate the stand they are taking, and let City Council know that the majority of citizens honor and respect our flags.  Haley Toyota’s City of Roanoke Christmas Parade – 6:30 p.m. – Downtown Roanoke. 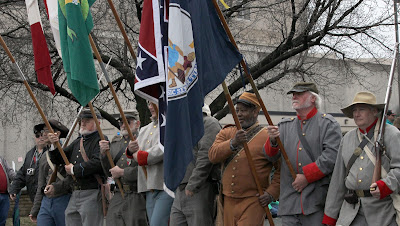 Finally, things are really heating up in New Orleans.  Just this week, it was revealed that City Council would meet tomorrow night, December 10th to discuss and vote on removing the monuments, and subsequently changed so that discussion would take place tomorrow night, and a vote on December 17th.  For the first time, Councilwoman Stacy Head spoke out yesterday against this steamroller-like process, and publicly stated what many have been voicing for some time…

“Although the Council has yet to hold its first hearing on whether these monuments should be removed, the administration has apparently already selected some or all of the contractors to perform the work to remove them,” wrote in the email. “They have also arranged for their storage in warehouses—a wasteful decision that would make future transportation of these sculptures to private institutions costly and difficult. These actions imply that the decision to remove the monuments is a foregone conclusion.”

Now, for the good news… Several grassroots organizations have stepped up and have been working hard behind the scenes.  They went public yesterday with a press conference and delivered a 32,000 signature petition to city hall.  http://thehayride.com/2015/12/breaking-pro-monument-supporters-deliver-petitions-to-new-orleans-mayor-city-council/

This from Save Our Circle’s Tim Carroll…

“Let’s take a step back and look at how much we’ve accomplished. Back in July, the mayor was positive he’d have a 7-0 vote to remove the monuments. And he was right. It seemed in 60 days from his announcement that the monuments would be voted to be removed. Supporters for our cause were hiding in fear of retribution.

Fast forward to today. The 7-0 vote is no longer a reality. It’s possibly 4-3 at this point. The vote is continually delayed and deferred. And now the media is covering our press conference and the hiding supporters are emerging exponentially. We are constantly in articles, news stories, and the topic of many call in radio shows.

We still have a very long road ahead, so our vigilance and tenacity must remain at the same level that got us this far. We will Save Our Circle and Save ALL Monuments.”

The folks in New Orleans are asking for our help in an email/phone blitz between now and December 17th.  They have a wonderful website that makes it VERY easy.  Go to www.saveourcircle.com .  Click “Take Action” at the top of the page and click “key contacts” in the drop-down menu.  Contact each one on the list and voice your opposition to removing ANY historical monuments in New Orleans.  They even provide sample letters, if you wish to use one.

Rise up, Dixie…our time is NOW!

UNSUBSCRIBE:  This is a periodic email update list of the Va Flaggers.  To be removed from the list, please reply with “UNSUBSCRIBE” in the subject.