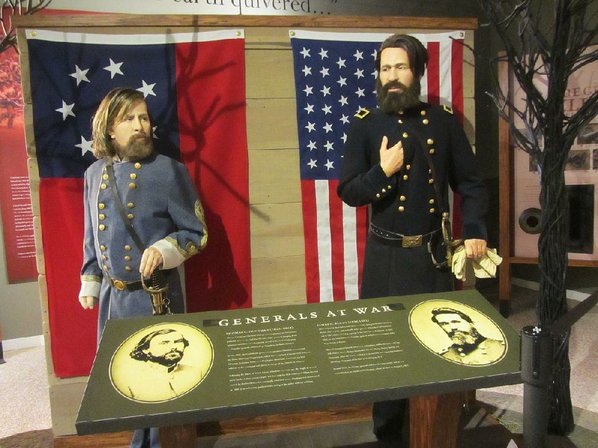 PRAIRIE GROVE — More than 2,000 men were killed or wounded here during a single day of combat on Dec. 7, 1862. But there will be no crack of rifles or roar of cannons this weekend as Prairie Grove Battlefield State Park marks the bloody encounter’s 153rd anniversary. Saturday and Sunday’s Civil War Living History Weekend will feature a Christmas Open House at one of the nation’s most intact Civil War sites. Some military buffs clad in uniforms such as those of the 1861-1865 conflict are expected to be on hand. But the program from 9 a.m. to 3 p.m. both days will focus on civilian pursuits of that era in Arkansas.

While food is cooking in the Latta House kitchen, members of the local Wool and Wheel Handspinners Guild and the Dogwood Lace group will demonstrate domestic skills that were so important in the mid-19th century. There will be guided tours of the log Latta House, built in 1834, and the Morrow House, which contains exhibits on the effects of the Civil War on Ozarks culture. A full-fledged battle re-enactment takes place only on even numbered years at Prairie Grove. Doing a replay every year would risk figurative combat fatigue from too much frequency, according to a park ranger. So the next simulated fighting is set for December 2016. Visitors seeking military action this weekend will have to settle for a bit of marching and displays of camp life.

The battle is vividly evoked every day by exhibits and a video at the Hindman Hall Museum Visitor Center, along with a driving tour and a walking tour of the battlefield. This one-day conflict was a tactical draw — but a key strategic victory for Union troops under the command of Brig. Gen. James G. Blunt and Brig. Gen. Francis J. Herron. They drove back the Confederate forces of Maj. Gen. Thomas C. Hindman, assuring that Missouri and Northwest Arkansas would remain under Union control until war’s end in April 1865.

The day’s Confederate losses totaled 204 dead and 875 wounded. There were 175 Union dead and 808 wounded. The carnage was brutal, as recalled many years later by Caldonia Ann Borden, who’d hidden in a cellar as a 9-year-old while fighting raged outside. She is quoted on a sign at the Morton Homesite, along the self-guided driving tour: “After dark it got quiet and we came out of the cellar. There was a dead man across the cellar door, wounded and dying men all around. I can still hear them yelling ‘help-help-help.’ The men worked through the night helping the wounded. Yankees and Rebels all got the same care. … It sure was scary and pitiful. Some of us got sick.”

There are 14 stops on the five-mile Self-Guided Driving Tour, including Borden House and Orchard, where the heaviest fighting took place. According to the tour brochure: “General Herron reported 250 dead within a 100-yard radius of the house. One soldier stated that the ground was ‘muddy with blood’ on the hillside where Confederate cannons … sat during the battle.”

Borden House and Orchard is also one of 11 stops on the Battlefield Trail, a one-mile walking loop through the eastern end of the park. A trail sign near the house reports that two Union units in the orchard “found themselves surrounded on three sides by a superior Confederate force, which poured volley after volley into the blue ranks.”

After the fighting, with losses roughly equal on both sides, Confederate forces retreated south after dark with their ammunition nearly exhausted. Prairie Grove, as the park brochure points out, “was the last major Civil War engagement in Northwest Arkansas. Never again would a Southern army attempt to use the area as an avenue of invasion to Missouri.”

Prairie Grove Battlefield State Park, on U.S. 62 nine miles southwest of Fayetteville via Interstate 49’s Exit 62, is open daily from 8 a.m. to an hour after sunset. The Visitor Center’s Battlefield Museum is open daily 8 a.m.-5 p.m. The park will be closed on Christmas Eve, Christmas Day and New Year’s Day. Admission is free.