“Cathedral of the Confederacy” removing all images of Confederate flag

“Cathedral of the Confederacy” removing all images of Confederate flag

RICHMOND — The historic St. Paul’s Episcopal Church, known as the “Cathedral of the Confederacy,” has begun removing all images of the Confederate flag from within its walls. 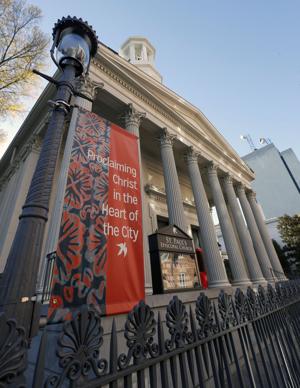 The measure includes six plaques with various versions of the Confederate flag, the church’s coat of arms with the flag on kneelers at the high altar, and bookplates in some books in the church’s library.

The coat of arms will be retired, and the church will start to dig deeper in its history, the role of race and slavery in that history, and how parishioners can engage in conversations about race in the Richmond region, church leadership announced Sunday, three months after conversations began with the congregation.

The elected church leadership also said it hopes to erect a memorial to honor slaves in Richmond, especially slaves who were members of St. Paul’s Episcopal.

“While the Vestry does not believe that St. Paul’s should attempt to remove all symbols reflecting St. Paul’s past during the Civil War, the Vestry is united in agreement that it is not appropriate to display the Confederate battle flag in the church,” a church statement said.

The needlepoint kneelers already have been removed from the sanctuary. The two plaques on opposite walls of the sanctuary honoring Confederate Gen. Robert E. Lee and the Confederacy’s President Jefferson Davis will be removed and placed in a not-yet-determined exhibit. Also in the exhibit will be a plaque installed in 1961 memorializing Confederate soldiers.

The announcement came five months after the Charleston, South Carolina, church massacre that left nine people dead and sparked a national conversation on the appropriateness of Confederate flags in public places.

Soon after, the General Convention of the Episcopal Church passed a resolution urging their churches nationwide to remove any Confederate battle flags.

St. Paul’s Episcopal Church in downtown Richmond across from Capitol Square has not flown the Confederate flag since the 1960s.

But mementos honoring the Confederate era of Richmond’s history are prominent in the church’s sanctuary. Windows depicting Robert E. Lee and Jefferson Davis as biblical characters will remain untouched.

The church was founded in the early 1800s and later became inextricably linked to the Civil War. Lee and his wife attended services there throughout the war, and Davis became a member in 1862.

It was there that Davis received the message that Lee was forced to withdraw from Petersburg and could no longer defend Richmond. Davis quietly left the church service and the evacuation of the city began, signifying the end of the Civil War. A small plaque, which will remain, marks where Davis sat that day.

In August, the church started with a list of 23 items that have any mention or symbolism of the Confederacy and held two discussions among congregants about how to address them.

In response to those conversations, the church “voted overwhelmingly to embark on a new journey of racial reconciliation,” the church’s statement said.

A summary of the two conversations in August that involved about 100 congregants at each showed distinctions were made between private memorials to family members and monuments to “the cause.”

The congregation also expressed a desire to communicate with the families of Lee and Davis and to connect the church’s history to its present, which includes long-standing community outreaches in the East End.

“During the Prayerful Conversations, one parishioner commented that St. Paul’s should become known as a Cathedral of Reconciliation,” St. Paul’s said. “The Vestry wholeheartedly agrees, and we are excited to begin on the journey towards that goal with all of you.”