From: ‘Patricia S. Godwin’ oldsouthrebel@zebra.net
[FlagFight]
<FlagFight@yahoogroups.com>
Date: Wed, Sep 30, 2015 at 8:23 AM
Subject: Re: [FlagFight] Ga SCV Plates
To: FlagFight@yahoogroups.com
After this hard fought fight, EVERY GEORGIA DIV SCV member should have an  SCV tag on at least one of his vehicles!  I have said this in Ala for years!  We did not have to struggle to get our tag…Butch & I were present at the Legislative Oversight Committee meeting when the Div Commander presented the SCV license plate proposal to the committee…a diverse committee of men, women, black & white. NOT ONE WORD of opposition was spoken then..lap-tap-thank you ma’am…we were told that day to sell 250 tags within one year & we’d have the decals to stick on our tag…then sell 1000 tags & we would have the hammered out medal tag with the insignia manufactured in the tag…we did it! But Butch & I got on the phone & made calls to the midnight hour trying to get folks to buy the tag.  It seems in Ala …the Auburn /Alabama distinctive car tag takes precedence…in my book…saving our heritage…our symbols, rituals, songs, flags, monuments, etc. is far more important that a bunch of gladiators with the IQ of a shoe wearing a football uniform!!!
I am told that the Ala Div SCV car tag sales are down…with what is going on across this country, I hope folks in Ala will wake up and buy their SCV tags…almost all the $50 goes back to the SCV…that cartag afforded the Ala div  to buy that land on I-65 & put that pole & flag up!  We need MORE all over Alabama!
Pat Godwin
The Georgia Division, SCV specialty plates are officially available at all the tags offices effective today. See below link to the Ga  DMV web-site.
http://mvd.dor.ga.gov/motor/plates/PlateDetails.aspx?pcode=CV 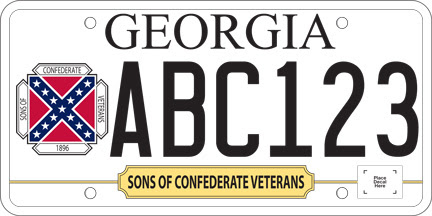 The SCV specialty plate is available to all citizens of Georgia.  One does not have to be a member of the SCV in order to obtain the SCV specialty plate; and no tag office may deny Georgia drivers their choice of the plate.  A portion of the specialty plate fee goes to the SCV and is used to fund historical projects in the State of Georgia such as new monuments, monument restorations, veterans’ grave markers, and educational projects related to the Confederate soldier and his Christian values.

For more information about the Sons of Confederate Veterans or any of this year’s planned events to commemorate the Sesquicentennial of the War, contact the Georgia SCV at 404-271-8473 or online at www.GeorgiaSCV.org
rhett2017-03-25T00:22:34+00:00