Baltimore officials want the city rename a park bearing the name of Confederate general Robert E. Lee. They say changing the name would show sensitivity to the city’s diverse population. Lee fought for the South in the American Civil War.

In a letter sent to the city’s solicitor and director of parks and recreation, Baltimore County administrator Fred Homan is asking for approval to change the name of the historic district to Lake Roland Park. Established in 1940, the Robert E. Lee Memorial Park has been managed by Baltimore County since 2009.

“In a region as diverse as the Baltimore metropolitan area, the new name is much more sensitive to the diverse population that visits and utilizes the park,” Homan wrote.

Baltimore Sun journalist Luke Broadwater posted a photo of the letter on Twitter. 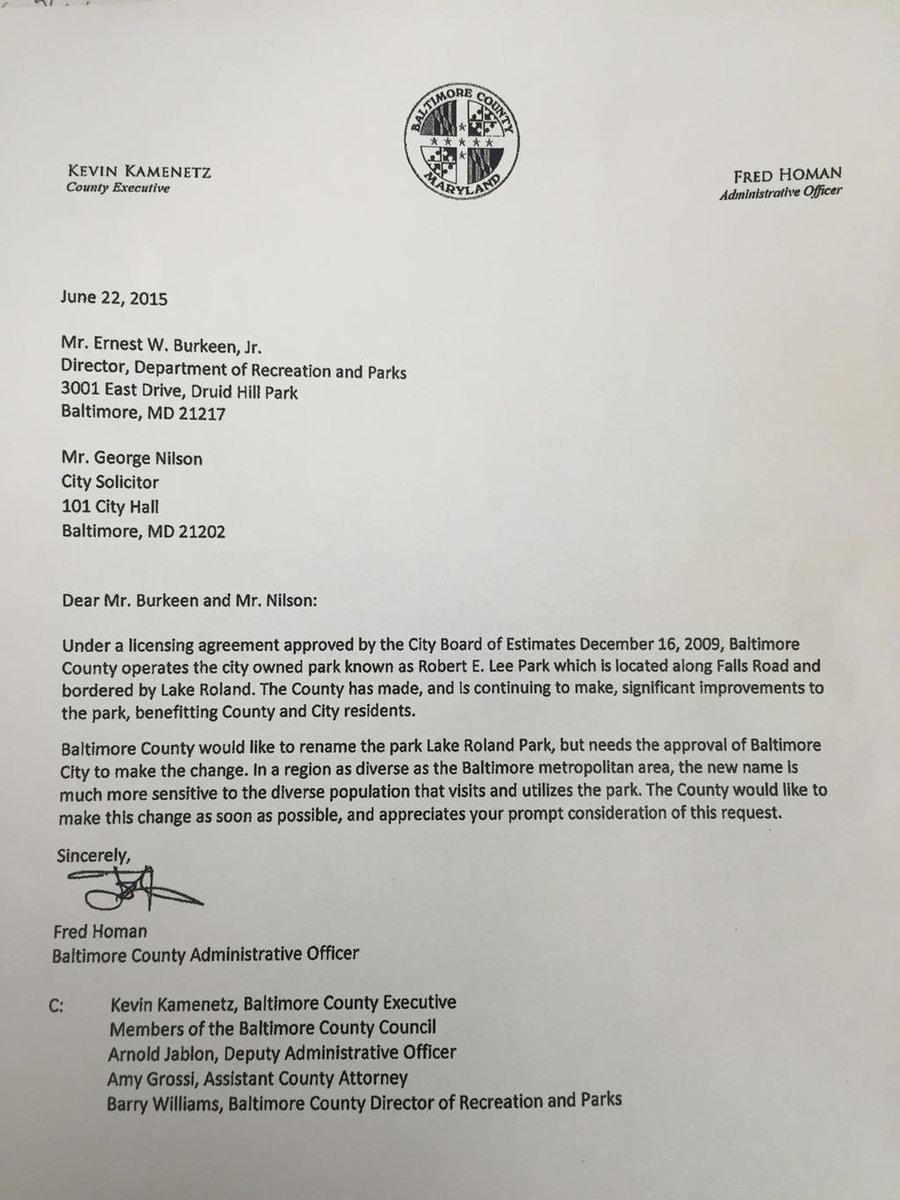 Meanwhile, someone painted the words “Black Lives Matter” onto a monument to the Confederacy close to the main railway station in Baltimore. Dedicated in 1903, the “Spirit of the Confederacy” monument was the work of Frederic Wellington Ruckstull, and bears the inscription “Gloria Victis,” or “Glory to the Vanquished.”

Slavery was legal in prewar Maryland, and sympathies for the newly declared Confederacy led the Union government of President Abraham Lincoln to place the state under de facto military occupation in May 1861. Two of the bloodiest battles of the subsequent conflict, Sharpsburg (1862) and Gettysburg (1863) were fought on Maryland and Pennsylvania soil.

In both battles, the Confederate Army of Northern Virginia was led by Robert E. Lee. Son of a Revolutionary War hero, Lee had served in the US Army with distinction, both in the Mexican War and as commandant of the West Point military academy, but cited loyalty to his home state of Virginia when choosing a side in 1861.

Lee’s surrender at Appomatox in April 1865 ended the war. Revered by his soldiers and respected by his foes, he advocated reconciliation until his death in 1870. Numerous landmarks across the South bear Lee’s name, while his former home in Virginia became the Arlington National Cemetery.

Civil rights activists have called for the removal of Confederate names and symbols from public spaces, arguing they represented hate and intolerance towards African-Americans. Last week, the US Supreme Court ruled that Texas could refuse to issue license plates with the Confederate flag. Such plates are still allowed in Alabama, Georgia, Louisiana, Maryland, Mississippi, North Carolina, South Carolina, Tennessee and Virginia.

In the wake of last week’s massacre of African-American churchgoers in Charleston, South Carolina Governor Nikki Haley has called for the removal of the Confederate battle flag from the state’s Capitol grounds, a decision that still has to be made by the state legislature.

South Carolina was the first to secede in 1861, and the first state of the Confederacy. The war banner of Lee’s army used to fly from the state’s Capitol dome until 2000, when it was moved to a nearby monument.